Then, as now, families like to have a relative baptise the latest additions to the family. When it is grandfather performing the baptism then the family travels to grandfather's parish. I've recently transcribed some baptisms held at St Martin Outwich in the City of London and found these nice examples of a family having grandfather baptise the latest additions.
Here is  The Rev John Joseph Ellis, M.A. record in the CCEd, the Clergy of the Church of England database. His son, George Stevenson Ellis, lived nearby at South Sea House but moved out to Blackheath and still returned to have his father perform the baptisms. His daughter Elizabeth (Ellis) Atkinson, lived in Hampstead and came into the city for her father to perform the baptisms.

Knowing the occupation of relatives can make all the difference in finding baptisms which don't appear in the home parish.

Posted by Rosemary at 2:06 AM No comments:

Following my previous post on  Henry Tissott 1832 Letter from Gaol Henry's father Joseph Tissott petitioned the court for clemency because he was only 13. 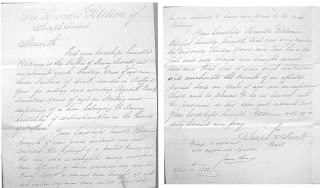 The humble petition of Joseph Tissot
Sheweth
That your Lordships humble Petitioner is the Father of Henry Tissott an unfortunate youth thirteen years of age now under Sentence of Death recorded in Stafford Gaol for aiding and assisting Elizabeth Banks seventeen years of age in Stealing and disposing of a cow, belonging to Henry Crutchley of Wolverhampton in the County of Stafford.
Your Lordships humble Petitioner prayeth of your great goodness you will consider the feelings of a parent having but this Son and a daughter many miles from him left out of Seven children my said Son Henry Tissott has always been brought up with me under my own care untill Childlike he was enticed to leave me prior to the said Robbery.
Your Lordship’s Humble Petitioner therefore humbly prayeth that you may consider the prisoner’s tender years, and that this is the first and only charge ever brought against him, and that you of your great compassion will ameliorate the anguish of an afflicted parent Sixty one years of age over an unfortunate child
and be pleased to be as lenient with the prisoner as his case will admit and your Lordship’s humble Petitioner will as in duty bound ever pray
Joseph Tissott – his mark
Posted by Rosemary at 2:00 AM No comments:

Rosemary
Tulsa, Oklahoma, United States
Retired computer programmer now using my debugging skills to search for that elusive relative. Am owned by 4 cats and half a dog.